17-year-old emerging swedish sensation Alexander Isak who plies his trade for AIK solna football club who has been on the wish list of premiership giants; liverpool and manchester united seems to have been bought over by chelsea owner Abramovich. This is coming on the heels of news that the youngster who has scored a whooping 10 goals in 22 matches has signed a deal with Serbian agent Vlado Lemic who happens to be friends with chelsea owner Roman Abramovich. 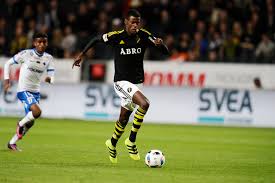