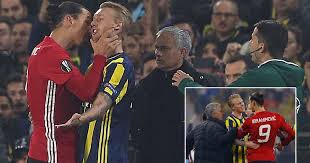 Its been quite a spell of frustrations lately for the red devils and this time, it took its toll on Manchester United front-liner Zlatan Ibrahimovic.
A rather bizarre incident went unpunished by referee Milorad Mazic at the Ulker stadium during the Europa return leg match between Fenerbahce and Man Utd yesterday.
The incident involved Man Utd striker Ibrahimovic and Fenerbahce defender Simon Kjaer. The former grabbed the latter by the throat just after a tackle.
This action could earn the Swede a retrospective ban. 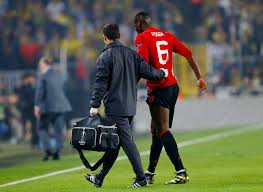 Pogba limps off pitch in first half against Fenerbahce

Ibrahimovic came off the bench to replace injured Paul Pogba in the first half.
Following recent developments in the club, Manchester united legend Paul Scholes has said that watching the club has left him "depressed".
" I think United have two big problems at the moment. They are really struggling to score goals and to win games of football with Blind and Rojo at centre half, they almost need to score more because they are always going to give away goals all the time.
They don't sense danger, they have no pace, they don't get physical against people and its a worry because at the other end they really don't look scoring goals". 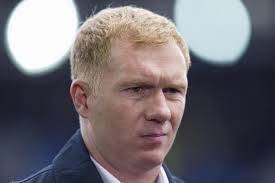