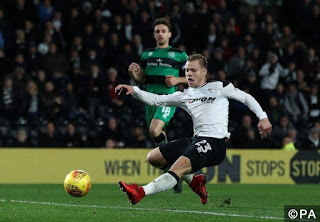 *4 of Leeds’ last 5 away games have ended in defeat by a one goal margin.*

Derby have had a full eight days to stew over a disappointing defeat at Hillsborough last week and they’ll be determined to bounce back here and get their automatic promotion bid back on track. Leeds now look like major outsiders for the top six but with a few players back from suspensions, they should be able to make a game of this.

It has been a very poor start to 2018 for the Yorkshire club, who are without a win in nine matches now in all competitions in a run that stretches back to Boxing Day.

The Rams do look the more likely victors as they’ve been heavily reliant on Matej Vydra for goals. The Czech striker has netted 17 times in the Championship this term, more than any other player. With 4 of his team’s 8 goals in 2018, backing Vydra to score anytime looks a decent punt here.

However aside from him, Derby have managed to net just 4 times in 8 matches so far this calendar year so it’s hard to see them running away with this. 75% of their home league games this term have produced under 2.5 goals in total and this does look like a strong candidate for a repeat.

Derby won 2-1 at Leeds earlier this season. They’ve also won 5 of the last 6 in the East Midlands.

6 of Derby’s 8 games this year have produced under 2.5 goals.

4 of Leeds’ last 5 away games have ended in defeat by a one goal margin.