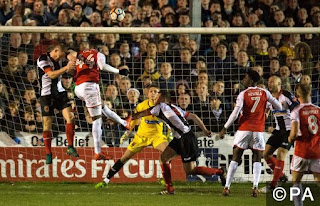 Both teams have scored in 62% of Fleetwood’s home matches in League One this season.

‘Over 2.5 Goals’ has landed in 62% of Fleetwood’s home matches in League One this season.

It’s now just three wins in 17 League One matches for the Trawlermen, who’ve reacted to that defeat by sacking manager Uwe Rosler. Having parted company with the German, the club will have surely altered their ambitions and will simply be looking to avoid being sucked into a relegation battle.

Similarly, Portsmouth are also in poor form, though they do find themselves in a far better league position than their opponents here. Kenny Jackett’s men remain within touching distance of the top six, but their form needs to improve, or they will soon be cut adrift from the promotion-chasing pack.

In truth, scoring goals hasn’t been too much of a problem for either of late, as they’ve each scored in four of their last five matches. It is at the other end where the problems have occurred. Both teams, for all they’re not in great form, do have plenty of capable attacking players, players who should be relishing the chance to go against leaky defences.

Fleetwood have struggled massively to get their heads in front and it appears that they’ve lost all defensive solidity. They’ve kept just two clean sheets in their last 15 league matches; however, for the most part, they remain a side that is capable of scoring goals. Saturday’s embarrassment was the first time that the Cod Army have failed to score in nine matches. They could continue to struggle defensively, but against a Portsmouth back-line that has recently been described as “brittle” by Kenny Jackett, the hosts should be up for it offensively.

Portsmouth have had similar issues of late, as they’ve attacked well at times, but most of their forward work has tended to be undone by defensive weakness. As we saw against Southend on Saturday, Pompey have something of a soft under-belly at the moment, which ought to encourage the struggling hosts. As they’ve been scoring and conceding plenty, like Fleetwood, Portsmouth have been no strangers to high-scoring matches of late. Another could easily unfold at Highbury Stadium on Tuesday.

Portsmouth did win by a clear margin (4-1) when the teams met earlier in the season, but that was their first ever victory against Fleetwood, as they’d lost each of the previous two.

Both teams have scored in 62% of Fleetwood’s home matches in League One this season.

‘Over 2.5 Goals’ has landed in 62% of Fleetwood’s home matches in League One this season.