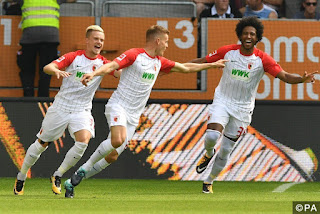 *Stuttgart have not won away from home since February 2016*

Read on for our Hot Preview and Prediction for this Clash.

Stuttgart – winless against Augsburg since 2012 – aim for their first away win of the season at the WWK Arena on Sunday.

In terms of betting, Stuttgart hold the single worst away record in the Bundesliga (D2 L9) and their awful record against Augsburg in recent years makes backing the hosts the best option here. Augsburg have been at their best when playing in front of the home fans (W5 D4 L2) – very much like Stuttgart, who have also performed much better at the Mercedes Benz Arena – and their strong goals per game average has been maintained by the rest of the squad – namely Gregoritsch – in the continued absence of their top scorer. Stuttgart, meanwhile, are yet to keep a clean sheet on the road, and even conceded 3 goals to the struggling Mainz 05 the away outing before last.

How will it stand at the final whistle? Well, Stuttgart’s long run without an away win will no doubt take a knock to their confidence, but should Mario Gomez feature, we wouldn’t

However, Augsburg are known to fight to the end (see statistics) and with their own Michael Gregortisch in the form of his life – he has tallied the best goals and assists totals of his career this term – you have to fancy the hosts here, given all the other trends. With Augsburg’s average goals scored far-outweighing those of Stuttgart’s, our money is on a strong home draw no bet.

Stuttgart drew 0-0 at home to Augsburg when the two sides met last September. Augsburg won all of the seven meetings prior to that.

Augbsurg have averaged 1.73 goals per game at home this season.

Stuttgart have not won away from home since February 2016.