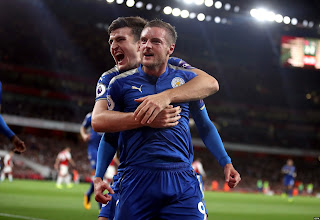 *Leicester are unbeaten in five games against Stoke. They’ve won the last 2 meetings in the East Midlands to nil.*

It’s hard to look past the hosts here. Leicester are in good form at home with only 1 defeat in their last 10 matches at the King Power Stadium, discounting a shootout defeat in the League Cup. They’ve won four of their last five home games to nil so they’ve been pretty solid at the back of late and going forward, they’ve certainly been able to rely on Jamie Vardy.

Stoke’s dreadful away record is another reason to fancy Leicester. They’ve taken just 0.46 points per game on their travels this term with only one away win all season in the league. That equates to the worst overall away record in the division and with the Foxes going nicely at home, it’s hard to see them improving on it here.

The head-to-head is also strongly in Leicester’s favour in recent times with Stoke struggling on recent visits to the King Power.

Stoke have managed just 0.46 per game away.

Leicester are unbeaten in five games against Stoke. They’ve won the last 2 meetings in the East Midlands to nil.