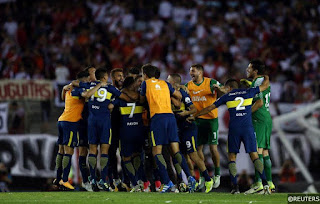 *The hosts have kept clean sheets in 3 of their last 4 fixtures.*

Boca’s dominance over the Argentine game shows no signs of stopping, with Guillermo Barros Schelotto’s troops continuing to win with frightening regularity.

Boca have only conceded once and have picked up 10 points from a possible 12, extending their lead at the summit to a big 9 points. Simply put, the team are impenetrable at the back and clinical in the final third, a formula that is always likely to win you lots of matches, and so it has proved, with 13 victories from 16 outings recorded.

San Martin are doing just well enough to avoid being dragged into a relegation scrap on the averages points table, they have collected just 2 points from their 4 outings since the league action resumed.

The difference in quality between the two outfits are vast, and whilst San Martin will try and put men behind the ball, Boca will likely break them down with consummate ease given the attacking talent they possess.

Boca have won the last two meetings between the sides.

Boca have won 5 of their last 6 home games to nil.

The hosts have kept clean sheets in 3 of their last 4 fixtures.

San Martin have lost their last 3 away games.

Over said run, they’ve found the net just once.