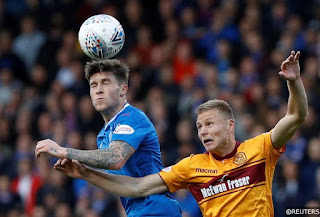 JOIN OUR VIP TO GET SURE PREDICTIONS WITH HUGE RETURNS

*the visitors have saved their best form for the road, and they have the strongest away record in the top flight*

*READ ON FOR OUR HOT PREVIEW AND PREDICTION*
Rangers head to St Johnstone on Tuesday night aiming to extend their grip on second, with the hosts in poor form.

There should be little problem for Rangers in this trip, despite the hosts returning to winning ways against bottom side Ross County at the weekend. The Saints have won just four times at home this term, losing six. Meanwhile, the visitors have saved their best form for the road, and they have the strongest away record in the top flight going in to this match. Having won 10 of their 14 matches on their travels in the Premiership, the Gers are in good shape to claim another three points

The visitors have averaged 2.29 goals per game on the road, and they’ve been winning with a pretty open style. Their games have been getting progressively more entertaining, with their last trip seeing a 5-3 win at Hamilton. It should come as no surprise that the Gers have seen over 2.5 goals in 86% of their games on the road this term, and we see another high scoring clash here. The visitors have a great record at this ground, and their last five visits have seen them win high scoring clashes on four occasions.

Rangers have won three of their last four meetings with St Johnstone.

Rangers have been winning at the end of each half in six of their last seven trips to St Johnstone.

The visitors have seen exactly three goals in half of their away trips.