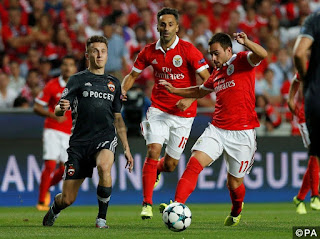 *Benfica have seen both teams score in 75% of their away trips.*

There is one advantage which the Eagles hold – their lack of European distractions. Having crashed out of Europe early, the champions now have no other matches apart from their last 11 league outings. While Porto and Sporting are still competing in the Champions League and Europa League respectively, Benfica are simply focusing on their next Primeira Liga opposition; which is bad news for Pacos de Ferreira.

The hosts are currently on a three game losing streak ahead of Saturday’s meeting, and that could be extended given the strength of the opposition. The visitors have won seven of their 12 away games this season, while they’ve won 12 of their last 15 league matches overall.

Not only have Pacos averaged over a goal per game at home this season, but they’ve found the net in 73% of their games here. They’ve found the net in five of their seven meetings with the top seven, while they’re meeting a Benfica side who have seen both teams score in 75% of their away trips. While the visitors are in strong form, they could slip up at the back in this trip.

A large part of Benfica’s fantastic form in the league has been the season which forward Jonas is having. He’s racked up an incredible 25 goals in 23 league games, which has added to Benfica’s high scoring form. He’s scored 30 times across his last 30 outings for Benfica, and he’s got 11 goals from their 12 away trips this term.

Benfica have won in four of their last six visits to this ground.

The champions have been ahead at the end of each half in 11 of their last 15 games in the league.

The visitors have also been leading at half-time in 75% of their away trips in the Primeira Liga this term.

Benfica have conceded all of their away league goals in the second half so far.