ATLETICO MADRID VS CELTA SURE PREDICTIONS FROM PREVIEW 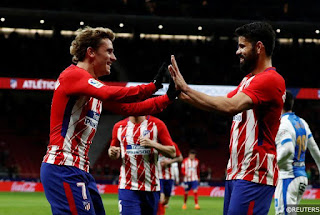 *Atlético de Madrid have won their last five games against Celta de Vigo in La Liga, keeping a clean sheet on four occasions, their longest winning streak versus Celta in the top flight since 1952 (six).*

Celta have lost 57% of their away games this season in La Liga. That’s not the kind of record that suggests they will become the first visiting team to win at the Wanda Metropolitano in the Spanish top flight.Their overall record against Atleti is not great in recent years either.

Atletico Madrid are still exceptionally good defensively. It took a moment of Messi magic to settle the top of the table clash last weekend and that was only the 12th goal that Atleti have conceded all season in the league. They boast an outstanding 63% clean sheet ratio and have shut the opposition out in 69% of their home games. They’ve won 62% of their league matches at the Wanda to nil.

However in recent weeks they’ve been scoring plenty of goals and they might be able to again put up a bigger winning margin here against a shaky Celta defence which has conceded in 81% of their league matches this term.

Atlético de Madrid have won their last five games against Celta de Vigo in La Liga, keeping a clean sheet on four occasions, their longest winning streak versus Celta in the top flight since 1952 (six).

​​The Galician team have lost their last three away games in La Liga after having won the previous three.

Griezmann has scored five goals against Celta since he joined Atletico, more than against any other team (alongside Athletic, Deportivo, Málaga and Sevilla).

The French player has scored those five goals in his last five meetings against Celta in La Liga.

Simeone has only lost one of his 11 games as a manager in La Liga against Celta (W9 D1).