BARCELONA VS CHELSEA SURE PREDICTIONS FROM PREVIEW 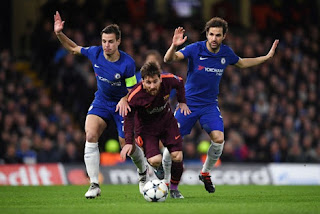 *Six of the last seven meetings between these sides have ended all square, with Chelsea winning the other one back in April 2012.*

Barcelona are now unbeaten in their last 14 competitive games since a shock loss to Catalan rivals Espanyol in the Copa del Rey. They bounced back from that first leg loss to progress in that competition, and they have won nine of their 14 games since that loss.

Chelsea, meanwhile, haven’t had such a fruitful year. They beat Crystal Palace on Saturday but have won just four of their 16 competitive games in 2018. Five of these have ended in defeat too, including dreadful performances against Bournemouth and Watford.

Away from home it’s even worse for The Blues. They have lost four games in a row on the road and won just two of their last 11 in all competitions. They also lost 3-0 at Roma earlier on in the Champions League, so the signs look pretty ominous for them.

One of Barcelona’s key tactics this season has been to come out of the blocks fast, trying to secure a lead before finishing the game off later on. This has, quite unsurprisingly, often worked, and 14 of their 21 home games have seen them go into the break ahead.

Barcelona have won 86% of their home games in all competitions this season.

The hosts have been ahead at the break in 67% of their home games, and have gone on to win 100% of these games.

Six of the last seven meetings between these sides have ended all square, with Chelsea winning the other one back in April 2012.