COPENHAGEN VS HELSINGOR SURE PREDICTIONS FROM PREVIEW 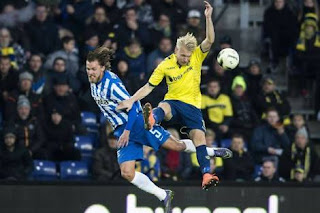 *These two have only previously met on two occasions, both of which saw Copenhagen come out on top. This season’s reverse fixture saw Copenhagen win by four goals to nil.*

Copenhagen might not be as strong as they’ve been in recent years, but this remains a very tough task for the struggling visitors, who’re currently bottom of the table.

Playing away from home has been a massive issue for Helsingor this season. The visitors, who’ve accumulated a measly five points on their travels, have found it especially hard from a defensive point of view when playing on the road. They’ve conceded no less than 28 goals in 12 away matches and have found it very hard to keep things tight, especially of late. They may have drawn 0-0 away at Randers last time out, but too much shouldn’t be read into that. Prior to that draw, Helsingor conceded six two games in a row.

Although the season hasn’t gone quite as Copenhagen would’ve planned, they’ve remained a force to be reckoned with on home soil. Unsurprisingly, Ståle Solbakken’s side have scored plenty of goals at Parken Stadium. What’s more, they’ve also made light work of handing out heavy beatings to some of the lesser defensive sides, as they’ve beaten Lyngby (twice), Silkeborg, AGF and Randers by at least three goals. Against a team who’ve struggled, especially against teams who can pin them back like Copenhagen can, the hosts ought to fancy their chances of another high-scoring victory.

These two have only previously met on two occasions, both of which saw Copenhagen come out on top. This season’s reverse fixture saw Copenhagen win by four goals to nil.

Copenhagen have beaten each of the current bottom five at least once by three goals or more this season.