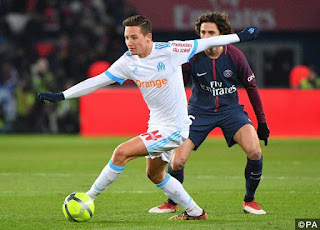 *Marseille are unbeaten in their last 10 home games in Ligue 1 (W8, D2) whilst only Paris are on a longer unbeaten streak on home soil (37).*

Neither of the two clubs can claim to be in form as they head into Sunday’s game, but with two wins, one draw, and three defeats its Marseille who claim the title of form favourites. The visitors have picked up one win, two draws, and three defeats during that same period of matches, but have now gone four games without a victory in Ligue 1. Whilst we expect a close game on Sunday, Marseille are unbeaten in their last ten league games at home and are one of three Ligue 1 sides yet to produce a single goalless draw this season. Nantes have only won two of their last ten away games and have registered the lowest points tally since the turn of the year, while only PSG better Marseille’s points return in 2018.

We’re confident that Marseille will win this game and that over 1.5 goals will be scored in the process. Nantes have only failed to score in one of their last six matches, while Marseille have conceded in each of their last three games in league and cup, so it wouldn’t be a surprise to see both sides score on Sunday. Thauvin has starred for the host this season and if he does play this weekend then he is likely to get on the scoreboard once again as he has seven goals in his last ten appearances and is overdue a good performance against Nantes.

• Marseille have lost just one of their last 11 Ligue 1 games played during the month of March (W4, D6).

• Marseille, alongside Angers and Rennes, are the only sides yet to register a goalless draw in Ligue 1 this season.

• Marseille are unbeaten in their last 10 home games in Ligue 1 (W8, D2) whilst only Paris are on a longer unbeaten streak on home soil (37).

• Nantes have registered the lowest points tally since the turn of the year, whilst only Paris (21) have accumulated more than Marseille (17).

• Nantes have only won twice in their last 10 away Ligue 1 games (D4, L4), having won each of the previous three on the road.

• Marseille have found the net in their last 26 home Ligue 1 games, only Monaco are on a longer streak (50).

• Only Luiz Gustavo has attempted more shots without scoring (15) than Andrei Girotto (14) in the second half of this Ligue 1 campaign.