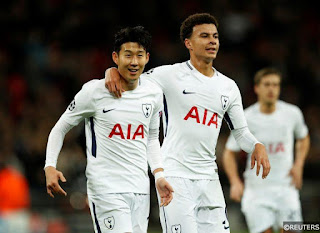 *Tottenham have scored in 96% of their home games in all competitions this season.*

*Juventus have only failed to find the net in 6% of their away matches this season.*

Tottenham went into their away leg against Juventus as significant underdogs against a side who had been nigh on impenetrable over the past few months. The outcome looked bleak to say the least when Gonzalo Higuain notched a brace in the opening ten minutes, but Spurs responded incredibly well and managed to get a 2-2 draw from the jaws of defeat.

Since then they have won three and drawn one of their four competitive matches, progressing in the FA Cup and pulling themselves well into the Premier League top four. Given their two away goals in Turin, their chances in the Champions League aren’t looking too bad either

Juventus won’t be an easy team to beat though. The Serie A champions have won all three of their games since that evening, extending their unbeaten streak to 20 games in all competitions. Their defensive record is second to none in Serie A, but conceding two at home to Tottenham has cast understandable doubt on their chances of getting a win at Wembley.

Tottenham and Juventus have each won one, drawn one, and lost one of their three meetings with one another.

Tottenham have scored in 96% of their home games in all competitions this season.

Juventus have only failed to find the net in 6% of their away matches this season.