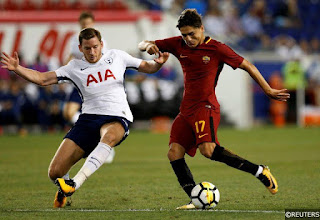 Roma have gone five games without a clean sheet at home in the league, while they’ve kept just one in their last eight here in Serie A. Given that the hosts have conceded in 71% of their home matches in the league, we can see Torino having some success in this weekend’s trip. After all, meetings between these two do tend to be high scoring affairs. There have been over 2.5 goals in eight of the last nine meetings between these two at this ground, which should continue in Friday’s encounter.

Roma have claimed five wins in their last six matches at home to Torino.

AS Roma have lost only one of their last 15 games against Torino in Serie A (W10, D4), scoring in each of their last 14 meetings (2.1 goals on average for match).

AS Roma have won seven home games in a row against Torino in Serie A, while they’ve never previously won more.

AS Roma have won four of their last five Serie A fixtures (L1), as many as they won in their previous 12.

- ANY OF THESE TO SCORE OR ASSIST