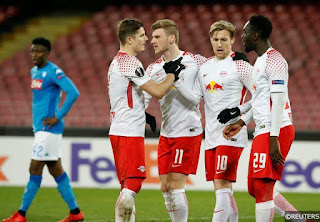 - *RB Leipzig have conceded in 87% of their last 15 competitive matches.*

*Zenit have scored an average of 2.5 goals per game in the Europa League this term.*

Zenith have been impressive in the Europa League over the past couple of seasons though. This year they have lost just one of their eight games, and it’s their scintillating attack that catches the eye. They have scored in all but one of these eight matches, netting a total of 20 goals.

RB Leipzig aren’t exactly solid at the back either. They have conceded 14 times in their eight European outings this season, and more recently they have failed to keep a clean sheet in 13 of their last 15 competitive matches, and in eight of their last nine at home. This makes backing Both Teams to Score look the best option on Thursday.

This will be the first meeting between these two sides.

RB Leipzig have conceded in 87% of their last 15 competitive matches.

The hosts have shipped an average of 1.75 goals per game in their debut European campaign.

Zenit have scored an average of 2.5 goals per game in the Europa League this term.