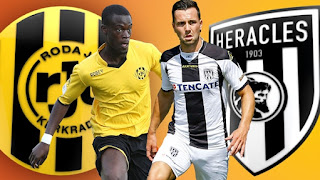 When the two sides met for their reverse fixture back in September, hosts Heracles had to come from behind to take all three points.

With two wins, two draws, and two defeats from their last six league games, it’s Heracles who head into Friday’s game as the clear form favourites. Roda, without a win in their last six matches, have only managed two draws and four defeats during that same period. However, we’re expecting to see goals in this game, as six of the last seven matches between the pair have seen both sides score. Roda have seen five of their last six matches in league and cup end with both teams scoring, while the same can be said about four of Heracles last six.

We’re confident that both teams will score in this game as they have done in six of their last seven meetings, and this season both teams have been poor at the back and looked half decent going forward.

These two clubs have met twenty-eight times before, and with 13 wins, 7 draws, and 8 defeats it's Roda who hold a five win lead in the head to head record.

Both sides have scored in five of their last six matches