ATLETICO MADRID VS SPORTING - SURE PREDICTIONS FROM PREVIEW 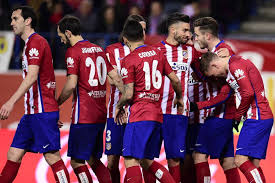 *Sporting haven’t conceded more than two goals away from home since October 2016, a run that goes back 45 games and includes trips to Juventus, Borussia Dortmund, and Barcelona.*

Sporting Lisbon have lost five of their last eight competitive games and have failed to score in three of them. They will need to show a monumental improvement if they are to get anything out of their trip to Madrid on Thursday.

Atletico Madrid’s form at home is almost perfect as well. They have won 14 of their last 16 games there, including the last eight on the bounce. During this time they have kept a clean sheet 13 times, and the last goal they conceded on home soil came all the way back in January.

We’re not expecting a thrashing though. Sporting haven’t conceded more than two goals away from home since October 2016, a run that goes back 45 games and includes trips to Juventus, Borussia Dortmund, and Barcelona.

Atletico Madrid have won 88% of their last 16 home games in all competitions, keeping a clean sheet in 93% of those victories.

The hosts haven’t conceded at home since the 20th January, a run that spans eight games.

Sporting Lisbon haven’t conceded more than two goals in any of their last 45 away matches.

Both of the previous meetings between these sides have ended all square, with those taking place in the 2009/10 Europa League knockout rounds.