BURTON VS MIDDLESBROUGH - SURE PREDICTIONS FROM PREVIEW 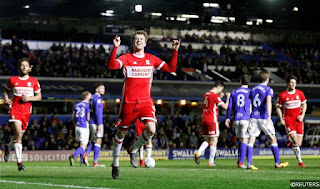 *The Brewers haven’t won at the Pirelli Stadium in almost six months since a victory over Fulham in mid-September. *

Boro's recent away form has been pretty impressive, with 4 of their last 8 on the road ending in victory, while just 2 of those games have been lost.

Up against a Burton side who can’t buy a win at home, Boro will believe they can improve on that record here. The Brewers haven’t won at the Pirelli Stadium in almost six months since a victory over Fulham in mid-September. Since then they’ve taken just 3 points from 15 home games which is a truly horrendous return and one that suggests they can’t have any complaints if they end up in League One next season.

Boro are one of the strongest sides in this division and while they’ve not always played like it this season, their recent form has been good enough to suggest they will bag maximum points here.

Boro won 2-0 in the first ever league meeting between the sides earlier this term. They also won 2-1 at Burton in the League Cup in 2015, although only after Extra Time.

Burton have lost 68% of their home games this season in the Championship.

Boro have only failed to score in 2 of their last 17 away games.

- DRAW NO BET AWAY
PREDICTION WON
- AWAY WIN