CHELSEA VS TOTTENHAM - SURE PREDICTIONS FROM PREVIEW 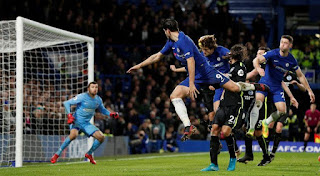 A win for Spurs would leave them eight points clear in the top four, whilst a Chelsea win would slash the gap to just two points.

The victories haven’t exactly been coming freely for Chelsea though, especially in the Premier League. They have won just three of their nine league outings in 2018, and while their form at Stamford Bridge has been better, they have still failed to deliver against both Leicester and Bournemouth in the last few months.

Tottenham were hoping to challenge for the Premier League title again this season, but they are well and truly out of the race and are just hoping for another top four position this season.

Away from home Tottenham have struggled at times this season too. They are unbeaten in six trips away in the league but have only won four of their last 11. Without Harry Kane their chances of winning plummet, and given the similar form and ability of both sides, backing a Draw here looks a good option.

Chelsea have won four, drawn one, and lost one of their last seven meetings with Tottenham.

Chelsea are unbeaten in their last 27 home league matches against Spurs (W18 D9) since losing 2-1 in February 1990.

Spurs’ 25 games at Stamford Bridge without winning in the Premier League is the most that one team has played on one ground without a single victory in the competition.

Tottenham have won more points in Premier League London derbies this season than any other side (13 – W4 D1 L2).

The Blues are looking to do their first league double over Tottenham since the 2005-06 season.

Spurs have surrendered the lead on each of their last two league visits to Stamford Bridge, drawing 2-2 from 2-0 up in May 2016, and losing 2-1 after Christian Eriksen gave them the advantage last term.

Spurs are unbeaten in six Premier League away games (W4 D2) since a 1-4 loss at Man City in December.

- AWAY WIN TO NIL NO
PREDICTION WON
- HOME WIN OR DRAW

- BOTH TEAMS TO SCORE
PREDICTION WON
*SEE MORE AT*
www.sportswinaffair.blogspot.com