CHELSEA VS WESTHAM - SURE PREDICTIONS FROM PREVIEW 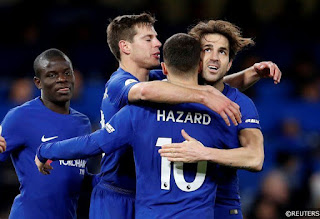 At Stamford Bridge, The Blues have won nine of their last 12 league matches, losing against Bournemouth and Spurs during that period. The defensive stability that characterised their title winning season last year seems to have vanished, with them conceding seven goals in their last four home league games.

West Ham will be hoping to take advantage of that, especially coming into the game on the back of a 3-0 battering of Southampton. This was a desperately needed victory after their shambles against Burnley, but they’re certainly not out of the woods yet. They are still only five points above the relegation zone and have games against Chelsea, Arsenal, Manchester United, and Manchester City to come.

Away from home The Hammers have lost three league games in a row though. This is all down to their cataclysmic defence, which has conceded a league high 37 goals on the road this season. They have kept just two clean sheets away from home all season, although recently have upped their attacking game by scoring in each of their last eight.

West Ham last did the league double over Chelsea in the 2002-03 campaign – a season in which they were relegated.

The Hammers have lost all three of their Premier League games played on a Sunday this season, by an aggregate score of 1-8.

Chelsea have lost five of their last seven Premier League games (W2). That’s as many as they lost in their entire title winning campaign of 2016-17 under Antonio Conte.

The Blues haven’t lost back-to-back home Premier League London derbies since 1999, when they lost 0-1 against West Ham in the March, before Kanu’s hat-trick saw Arsenal triumph 3-2 in the October.

West Ham have lost each of their last three Premier League away games, last losing four in a row back in September 2016.

David Moyes has won none of his 14 away Premier League games against Chelsea, drawing six and losing eight.