GREMIO VS MONAGAS - SURE PREDICTIONS FROM PREVIEW 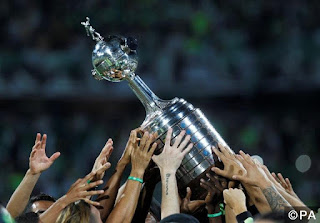 *Gremio will be desperate to win, as they seek to seize control over the group. Currently unbeaten in 7 home games*

Gremio possess one of the finest squads on the continent, evidenced by their crown, whereas Monagas have nowhere near the same resources and are struggling to even compete domestically.

Gremio will not want to slip in this one and the disparity in quality between the two is so vast that’s it’s simply unimaginable for them to do so.

Monagas arrive in dire straights and haven’t won in 11 matches, a miserable run dating back to the end of January. Los Guerreros del Guarapiche were heavily outclassed in what was their first ever Libertadores game back in February, losing 2-0 at home to Cerro Porteno, a side that had previously failed to win in 15 games on the road in the competition.

Monagas managed to lift the domestic title last season, despite finishing 6th in the opening stage of action and 5th in the closing phase, but are really struggling in a domestic scene which is by far the weakest in South America.

Gremio have won 5 of their last 7 homes games.

Monagas are 11 matches without a win.

They’ve failed to score in 4 of their last 6 away games.

This will be the first ever meeting between the sides.