LAZIO VS SALZBURG - SURE PREDICTIONS FROM PREVIEW 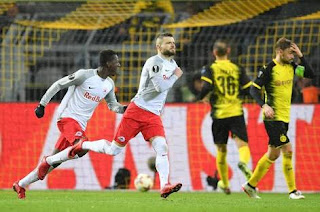 *the visitors come here having not lost any of their last 15 Europa League matches.*

Having conceded in five of their last six games, Lazio’s defence clearly aren’t in the greatest shape of late. They’ve also managed just one shut out in their last six at home, with bottom of the league Benevento scoring twice on Saturday ahead of this clash. That’s bound to boost the Austrians’ hopes of getting something out of this game, as Benevento had scored fewer away goals than any side in Europe’s top five leagues before the weekend.

Salzburg make this trip having not lost any of their last eight Europa League trips, while they’ve scored in seven of those matches. Of late, the Austrians have found joy in Germany and Spain, scoring twice at Dortmund and Real Sociedad in the last two rounds of this competition. They bring a strong attack to Rome, which should trouble a Lazio side who have seen both teams score in their last three at home in this competition.

However, the visitors come here having not lost any of their last 15 Europa League matches. That might not usually be something which Lazio worry about, but the Aquile have won two of their last seven. With one win in five at home, including a 2-2 draw at home to Dynamo Kyiv, we struggle to see the Italian side picking up their game in order to get a victory over Salzburg. The visitors are unbeaten in 35 in all competitions, and they’ve recently dumped out a better side in their meetings with Dortmund.

Lazio have drawn twice in the Europa League this term, both of which came at home.

The Aquile have scored at least twice in their last three games in this competition.

The hosts have seen over 3.5 goals in 47% of their home league games, and in half of their European ties.