VITORIA VS BENFICA - SURE PREDICTIONS FROM PREVIEW 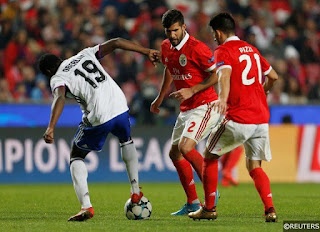 *The visitors have won by at least two goals in all but one of their away trips.*

Benfica now have the best away record in the top flight, and they have won three trips on the spin ahead of this weekend’s game. They’ve scored 2.07 goals per game on the road, but their only concern has come at the back this term. The champions have had their issues at the back on their travels. While they’ve only conceded 0.79 goals per game away from their own ground, they’ve still seen both teams score in 79% of their trips. Their goals conceded on the road have been spread out across plenty of away trips, while they’ve conceded 69% of their total goals against on their travels this term.

Benfica are scoring enough goals, so conceding the odd one hasn’t really affected them of late. However, will they concede once again when they visit Setubal this weekend? They have conceded in their last three trips to this ground, including shipping two goals in the cup in a visit here in December. With three clean sheets across their last 14 away trips in all competitions, we don’t expect the champions to record a shut out here. Although, they have scored in 96% of their league games, so the visitors should score.

Setubal have scored in six straight home matches, and they’ve found the net in 86% of their home games. Given their strong form at home to Benfica of late, and after some strong displays in front of goal this season, we expect the hosts to become the latest side to trouble the Eagles’ defence.

Benfica have won by at least two goals in eight straight matches.

The visitors have won by at least two goals in all but one of their away trips.

The champions have also claimed a 3-1 win in 35% of of their games on the road.

Benfica have hit 10 goals across their last three meetings with Setubal.