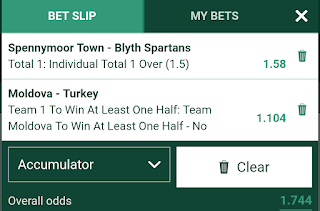 *TIP1*
Spennymoor have 1-3-4 so far. In those 8 games, they have scored 9 and conceded 15 goals which mean average 3 goals per match.The opponent is with very bad defense, so we can expect goals from the home team.

Blyth have 0-2-7 so far. In that 9 games, they have scored 4 and conceded 18 goals, which mean average 2,4 goals per match.The defense is allowing average 2 per match.

They played 9 mutual games till now. Seven games from that nice finished with over 2,5 goals.

*TIP2*
The two nations have met nine times in the last twenty years, with the most recent one dating to March this year. Turkey won 4:0 in that game and are still undefeated when facing Moldova this century, recording seven victories and two draws.  Three matches have been played on Moldovan turf, with two ending in the same scoreline of 1:1.