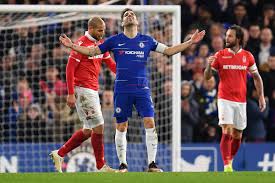 Chelsea’s 2-0 H2H victory exactly a year ago saw both goals arrive in the opening 15 minutes of the second half, and formed the penultimate part of what is six (consecutive) FA Cup home wins to-nil for the ‘Blues’ out of the last seven ties at Stamford Bridge.

Every one of Chelsea’s FA Cup home wins versus lower-league opposition in the 2010s has yielded a winning margin of 2+ goals.

Overall, Forest have lost their last five FA Cup away ties in succession, but by a margin of no greater than two goals.

A 60% majority of Chelsea’s last five competitive home wins have seen them specifically win one half 2-0.

January 2011 marks the last time any Forest squad managed to equalise with the next match goal after going 1-0 down in an away FA Cup tie.