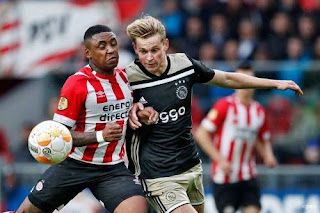 top-placed Ajax are almost faultless at home (W9, L1), smashing in 3.6 league goals on-average in front of their own fans this season.

Ajax have conceded in seven straight Eredivisie matches, including four straight at home.

Away from home, PSV are without a win in six straight league matches (D3, L3), conceding 2.0 goals on average.

There’s been at least two goals scored in all 20 of PSV’s league matches played so far this season.

RISKY TIPS
Over 1.5 home goals
Over 0.5 second half goals