BARCELONA VS LEVANTE PREVIEW AND TIPS 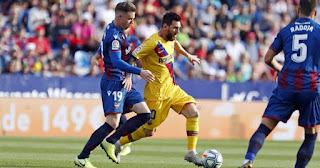 Barca remains the division’s top scorers by some distance, netting an average of 2.38 goals per game.

At home, 'Barça' have won with a -2 handicap in seven of their nine LL victories, and are yet to lose here this league campaign (W9, D1).

On a three-game losing streak in LL, Levante travel here as one of just two teams yet to draw on the road this league campaign (W3, L8).

There’s been no draw in the last 13 competitive H2Hs - eight produced over 3.5 goals.

SAFE TIPS
Over 1.5 match goals
Over 2.5 Yellow cards
Anybody win