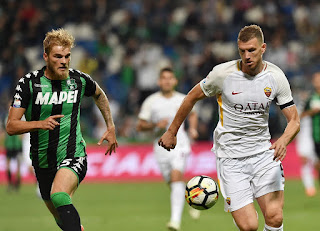 Sassuolo have never beaten Roma in a Serie A (SA) clash (D5, L8), losing three of the last four H2Hs.

Sassuolo stand the best chance of a result, considering that they have scored 21 of their 32 SA goals here (65.63%), impressively scoring in all ten prior SA home fixtures this season.

the visitors have conceded first in none of the last five H2Hs. The potential for an attacking start from the ‘Giallorossi’ is underlined yet further, by the fact that four of Roma’s last five away league matches have produced over 9.5 corners.

SAFE TIPS
Over 1.5 match goals
Away win or draw