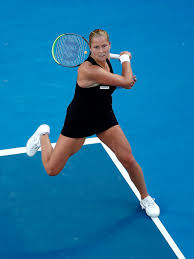 American Shelby Rogers said she would most likely have to contend with death threats on social media following her US Open defeat to Britain's Emma Raducanu on Monday.

Rogers' compatriot Sloane Stephens said she received a torrent of angry messages on social media, including racist and sexist abuse, following her third-round loss to Angelique Kerber at Flushing Meadows.

Stephens said she got over 2,000 messages of abuse after Friday's defeat, including threats of physical harm.