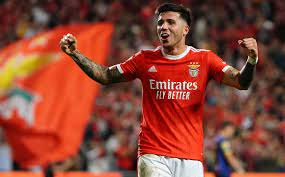 Benfica have expressed their unhappiness with the way Chelsea FC have recently handled talks on the Enzo Fernandez deal.

Schmidt said: "There is a club that wants him, they tried to attract him, but they know that they can only have him if they pay the clause. It's disrespectful to all of us, to Benfica, they're driving the player crazy, they pretend they want to pay the clause and then they want to negotiate”.

Meeting between agents of both clubs yesterday concluded without a deal being agreed.