RONALDO REVEALS HE HAS RESPECT FOR MESSI 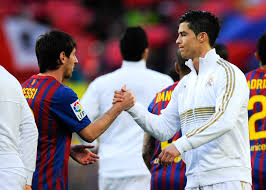 Real Madrid star Cristiano Ronaldo has revealed that a "mutual respect" exists between him and Barcelona superstar Lionel Messi.
Ronaldo who helped his club to lift another Champions League cup last season, added: "the media like to make out we have this big rivalry but we dont. It is not like we are good friends but there is a mutual respect on both sides"