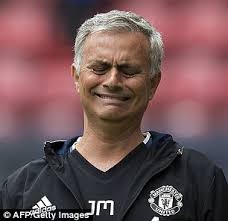 Manchester united will have to play this weekend game against Swansea without their coach Jose Mourinho following a double FA charge slammed on the Portuguese.
Mourinho was penalized for making awkward comments about referee Anthony Taylor prior to their Liverpool game and for a verbal assault on referee Mark Clattenburg during their goalless draw against Burnley over the weekend.
http://aprokosport.blogspot.com.ng/2016/10/mourinho-faces-stadium-ban.html?m=1

The Red devil's boss has since accepted the ban and 50, 000 pounds fine.