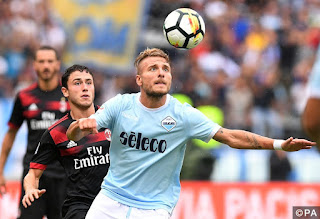 *Lazio have won each of their last four games against Verona in Serie A, scoring on average three goals per match.*

READ ON FOR OUR HOT PREVIEW AND PREDICTION;

The hosts are aiming to turn things around at Stadio Olimpico tonight and stay in the fight for the top four, so they can’t afford to be slipping up at home to another bottom three side.

The visitors have conceded two goals per game on average in the league this term, which makes things difficult for them against a brilliant attacking force. They’ve conceded at least twice in all of their visits to top half sides, which has to continue when you look at the vast amount of attacking talent Simone Inzaghi has at his disposal. Having shipped three to Lazio in the reverse fixture, the newly promoted hosts have to hope that Lazio have another off day.

Overall Lazio have seen 88% of their Serie A games this season finish with over 3.5 goals, while they’ve averaged 2.64 goals per game at home. Given that two thirds of Verona’s away trips have seen over 2.5 goals this season, we’re expecting a high scoring finish to the Serie A weekend.

The last time Lazio lost at home against Verona was back in December 1984 – since then for the Biancocelesti they boast eight wins and two draws.

Lazio have won each of their last four games against Verona in Serie A, scoring on average three goals per match.

Only Benevento (42) have conceded more open play goals than Verona (35) in Serie A this season.