COLOMBIA VS AUSTRALIA - SURE PREDICTIONS FROM PREVIEW 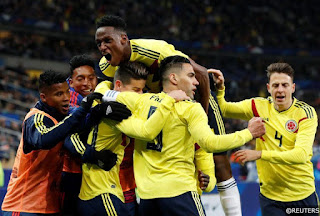 *Colombia have found the net in all but one of their last 11 fixtures.*

*Australia have kept just 1 clean sheet in their last 12 matches.*

The Socceroos are currently missing centre backs Matt Jurman and Trent Sainsbury and it certainly showed in the miserable outing, with the Norwegians, ranked 20 places below Australia, toying with them at times and cutting them open at will. Far from impressive in qualification, needing the play-offs to advance to Russia, there’s plenty of work to be done in the Australia camp if they are to avoid a swift return home in June.

Unfortunately, that’s not something that seems likely in this one, with the absences of Jarman and Sainsbury ongoing and coming up against a Colombian outfit with far greater quality than the side they were just hammered by.

The South Americans have scored three past France and two past Spain in recent friendly outings and should make light work of an Australia defence that has kept just 1 clean sheet in 12 matches, conceding an average of 1.61 goals a game in the process.

Colombia have found the net in all but one of their last 11 fixtures.

Over said streak, they’ve scored an average of 1.81 goals a game.

Australia have kept just 1 clean sheet in their last 12 matches.

During that run, they’ve conceded an average of 1.61 goals a game.

The sides haven't met since a 2001 friendly, which Colombia won 3-2. In three attempts, Australia have never beaten the South Americans.

- HOME DRAW NO BET
PREDICTION WON
- AWAY NO CLEAN SHEET