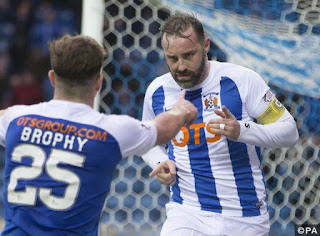 *Kilmarnock have won four of their last six meetings with St Johnstone.*

Kilmarnock have shot up the league through a great run of form, and they’ve lost just one of their last 12 matches in the Premiership. When you add that to their good run in the cup, then this could be a great campaign for the Rugby Park side.They’ve managed to translate their good run to the league, and they’ve won five of their last six at their own ground – which includes victories over Rangers and Celtic.

Meanwhile, the away side are in awful form ahead of this trip. They lost 4-1 at home to Rangers in their last match, while they’ve averaged less than a goal per game on the road in the Premiership. The Saints have lost six of their last 13 away matches in the league this season, while they have won one of their last nine league matches. With that in mind, we think the hosts are really well priced for a victory.

Kilmarnock have won four of their last six meetings with St Johnstone.

St Johnstone have scored in five of their previous six trips to this ground.

Kilmarnock have seen both teams score in 63% of their league matches.

All but one of the hosts’ victories this season have come by a single goal.

The Saints have lost by a one goal margin in 67% of their away defeats.