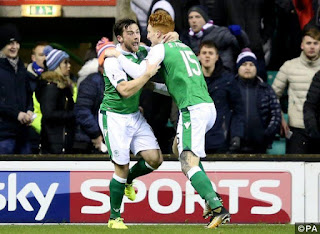 *Four of the last six meetings between these two have seen a home victory, with no away wins.*

*The visitors have seen under 2.5 goals in four straight Premiership games.*

Neil Lennon has brought consistent displays out of this Hibs side for almost the entire campaign, and they’ve got a solid home record. Their form at Easter Road has peaked in recent games, having won three of their last four at this ground. Since December, their only loss was at home to Rangers. They’ve drawn with Celtic in that time, seeing off the likes of Aberdeen and Motherwell; the side who knocked Hearts out of the Scottish cup last weekend.

The visitors have hit a slight slump in form, having boosted their campaign with an unbeaten run. However, they’ve failed to win any of their last four, which culminated in their cup exit last weekend. That run has included back to back away defeats, while they drew at bottom side Ross County in what should have been a very winnable game for the Jambos. That run isn’t exactly sending them in to this Friday’s big clash with a lot of momentum behind them.

Four of the last six meetings between these two have seen a home victory, with no away wins.

Hibs have been winning at the end of each half in each of their last four at home to Hearts.

The visitors have seen under 2.5 goals in four straight Premiership games.

The hosts have won by a single goal in 67% of their home victories this season.