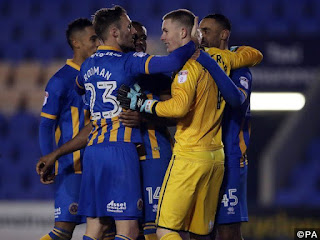 *Northampton have kept a clean sheet in just 14% of their League One matches this season. No team has been breached more times than the Cobblers.*

Not only have Shrewsbury conceded League One’s second fewest number of goals, but they’ve only failed to score in 14% of their matches. Only leaders Blackburn have done better in that respect. The Shrews have also been very good at limiting their opposition to few goal-scoring opportunities.

Scoring goals hasn’t always been a massive problem for Northampton, as they’ve scored in four of their last six, but keeping them out has proved beyond them. Hasselbaink’s men have kept just one clean sheet in the league since the start of December, during which time they’ve failed to keep their opponents out in 15 out of 16.

Only Wigan have kept more clean sheets in League One than Shrewsbury this season.

Only Wigan have failed to score in less matches that Shrewsbury in League One this season.

Northampton have kept a clean sheet in just 14% of their League One matches this season. No team has been breached more times than the Cobblers.