SURE PREDICTIONS FROM PREVIEW 2 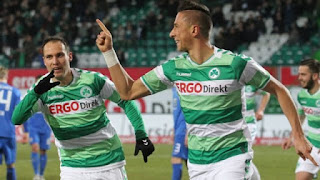 *Greuther Furth won 2-1 at home when the two sides last met in October. Erzgebirge are undefeated at home to Furth since 2013 (W1 D2).*

Furth are the most in-form side in the German 2nd tier currently. Like the hosts, Furth have pulled off some impressive performances over this streak, including a draw against league leaders Fortuna Dusseldorf and a 2-0 win against second placed FC Nurnberg. Another result against Erzgebirge Aue this weekend would be huge in helping them stay up.

Furth are an in-form side heading into this, but Erzgebirge hold a decent recent against them on their own turf (see head-to-head). With the hosts also boasting some stubborn home form this season, there are indicative signs that this won’t be an easy fixture for the visitors – Erzgebirge have lost just one of their last eight at home in the Bundesliga 2 (W3 D4 L1). With Furth’s form advantage balancing out against Erzegbirge’s home advantage, it’d be reasonable to expect this one to end deadlocked.

Both teams have scored in five of Erzgebirge’s last seven of home matches (71%).

Under 2.5 goals were scored in 62% of Erzgebirge’s home matches.

Greuther Furth won 2-1 at home when the two sides last met in October. Erzgebirge are undefeated at home to Furth since 2013 (W1 D2).