SWITZERLAND VS PANAMA - SURE PREDICTIONS FROM PREVIEW 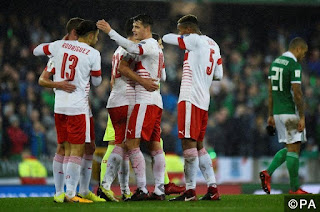 The Europeans were in friendly action last week, beating Greece 1-0 and they are strong favourites with the bookies here. Switzerland have only lost one match since Euro 2016 and even at that tournament, they didn’t lose within ninety minutes so they are a tough side to get the better of.

Defensive stability is key to that record. They’ve kept a clean sheet in 9 of their last 11 international matches, including all of their last 3. Captain Stephan Lichtsteiner really organises things well at the back for them and it’s hard to see Panama causing many problems here.

However it’s unlikely to be a massacre. Panama also have quite a defensive reputation and gave a decent account of themselves against Denmark last week, only losing 1-0. They are likely to be very cautious again here and with 3 of their 5 forward players aged 34 or over, they seem to be relying on experience but it’s hard to see them threatening on the counter-attack.

The hosts should win but with talisman Xherdan Shaqiri absent, they may also be a little short in terms of genuine quality in the final third. 5 of Switzerland’s 7 home games since the Euros have produced under 2.5 goals

2 of those goals resulted in 1-0 Switzerland wins.

Panama have won just twice away since January 2016.