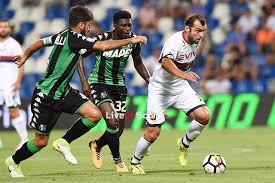 Sassuolo went into the break with just one loss in five SA fixtures (W1, D3, L1), but haven’t lost twice in a row since October. The travelling fans of Sassuolo have reasons to cheer though, picking up points in their last five SA trips (W2, D3).

The visitors seven of ten SA away goals have come during the second half of play.

Genoa have failed to score a first-half goal in five of their last six SA games.